The Cowbell Brewing Co. offers interactive tours throughout the onsite agricultural land and the building, educating the public about the entire process, from farm-to-tap.

The building is located in rural Huron County, an area rich with bank barn structures that have dotted the family farm landscape for more than 150 years. This traditional bank barn structure served as the design inspiration for the project, however, many contemporary elements and state of the art equipment are housed within. This barn is home to a brewery, restaurant, bar and retail space. One predominant feature the finely crafted, large timber-framed elements and, aside from the sheer size of the building, it is the exposed timber that is one of the most impressive features visible throughout the interior of the Cowbell Brewing Co.

“We were very excited to receive this award after the years of hard work and effort it took to complete this one-of-a-kind build,” said Jason Morgan, project architect at Allan Avis Architects Inc.

“Our client for the project, Cowbell Brewing Co., said from day one that this destination brewery had to be authentic, which included the mandate that we be stewards of the land, having a keen awareness of the impact the building would have on the environment.”

“The significance of this award has extra meaning for our office because our firm is based in Huron County and the award was given to this project, also located in Huron County.” “This year marks our 25th year in business and this is a great achievement to help celebrate that milestone,” said Allan Avis, President of Allan Avis Architects Inc.

The main attraction in the building, of course, is the high-efficiency brewhouse, consisting of a 50 hectolitre brewing system. This will be the first Boil Kettle Rectifier installed in North America. This piece of brewery equipment reduces required boil time by an average of 60 minutes, resulting in approximately 6% less evaporation, 300L water savings per brew and approximately 93,000L of water will be saved in 2018. This means 50% to 67% less steam generation and power needed during the boiling process. The gleaming fermentation and beer tanks, visible from the exterior, through the high-efficiency windows on the gable end of the cellar, make it evident upon approach, that this barn is producing something very different from the traditional family farm.

Some of the many sustainability efforts, incorporated throughout the building include: the closed-loop brewery operation that extracts all the water used in brewery production and treats the wastewater entirely on site, natural ventilation of interior spaces, airtight building enclosure, and the use of local and regional materials that are durable, recyclable and easily maintained. These sustainability attributes and many more will be put to the test throughout ongoing operations and energy analysis. The goal is for Cowbell Brewing Co. to be North America’s first certified Carbon Neutral Brewery.

“Having lived in my own off-the-grid home, with my family for nearly 10 years, I was able to translate much of the knowledge and experience gained from that lifestyle and building design, and apply it to the design for this project,” said Morgan. For instance, sun studies were completed early during the conceptual design, which influenced the shape, orientation of the building and roof overhang design. The overhang design helps to shade windows from summer sun and allows solar heat gain during the winter months to save on energy. The conservation of water and electrical use is also an important aspect when living off-the-grid and these were important considerations in the design of the Cowbell project. LED lighting was installed throughout the Cowbell building with dimming, multiple circuit controls, and occupancy sensors, allowing for use of the lighting only where and when it is required. The building also has low flow plumbing fixtures throughout. Total water efficiency savings from low flow plumbing fixtures are expected to be in the range of 20% over a similar building of this type.

Over 12 thousand trees have been planted on the 111-acre property, providing for numerous environmental, community and County benefits, such as reforestation of former low-yield farmland, enhancement of wildlife habitat and increasing local, natural resources. The reforestation efforts are part of a larger strategy to offset all the greenhouse gases produced by the building and the site, in keeping with the goal of becoming North America’s first Carbon Neutral Brewery. The onsite parking provides treed landscaped islands for shade; electric vehicle charging stations and bike racks support alternative green transportation options. The Cowbell Brewery also uses a “Wet Pond Facility”, a natural, on-site stormwater management system that treats stormwater runoff from the site, before discharging it to a neighboring creek that provides a natural habitat for water foul.

To reduce energy consumption and dependency on artificial lighting, and to improve the interior spaces for employees and guests, windows are located in all spaces of the building. Cupolas with high-level clerestory windows allow an abundance of natural light into the interior spaces with most of the windows being operable, including the two main cupolas, helping to cool the building through stack-effect. The operable windows are interconnected with the buildings HVAC system, turning off those systems when windows are open to save energy while improving the physical and psychological health of occupants. In addition to operable windows that reduce cooling costs, large, high volume, low-speed fans (Big Ass Fans) were installed to provide a wind-chill effect, making the spaces feel up to 6°C cooler in the summer. These fans also reduce heating costs by circulating warm air, trapped at the ceiling and directing it to the floor where it is needed.

The Cowbell Brewing Co. offers interactive tours throughout the onsite agricultural land and the building, educating the public about the entire process, from farm-to-tap. Emphasizing the use of local resources and ingredients in their beer, restaurant and in the construction of their building, highlights the importance of local and regional farms, suppliers and trades. The brewery shares their best practices and experience running their closed-loop brewery and carbon neutral program with other breweries who have the same environmental goals. Their ongoing success will be an example for all companies to be stewards of the land.

“We hope that our future designs, and the projects we complete over the next 25 years, will continue to place a strong emphasis on environmental stewardship and that Cowbell Brewing Co. will be among many other corporate leaders in the region to champion the important cause of sustaining the natural environment,” said Avis.

Watch them grow at www.cowbellbrewing.com. 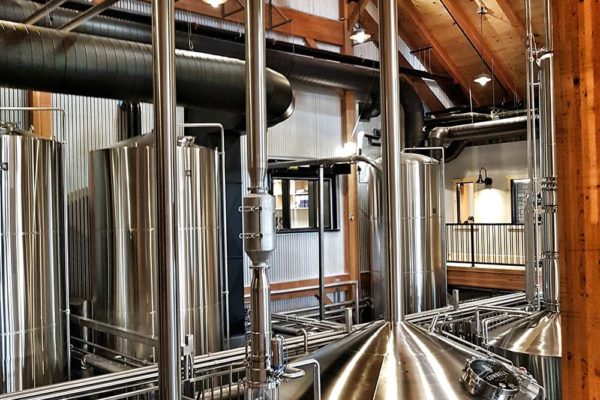 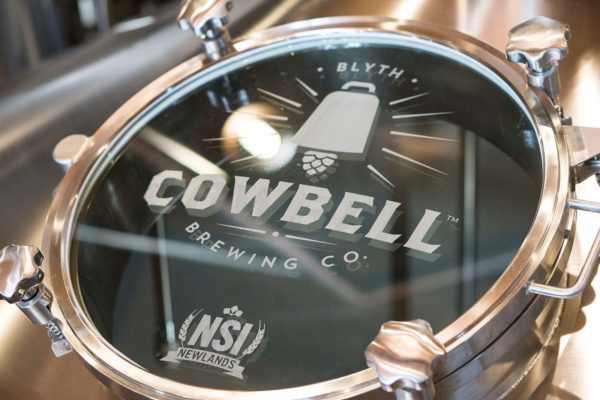 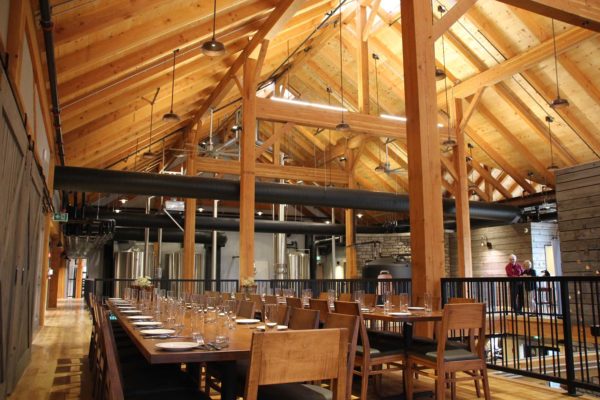 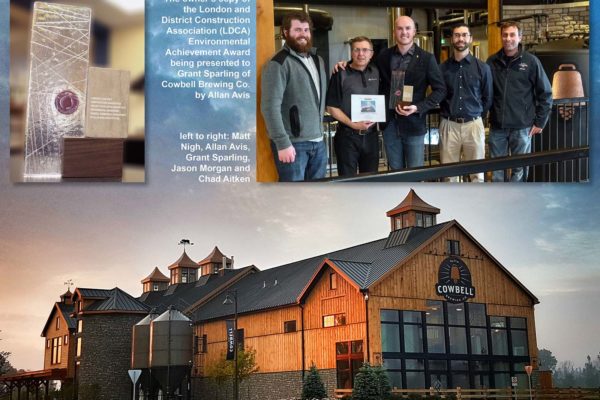 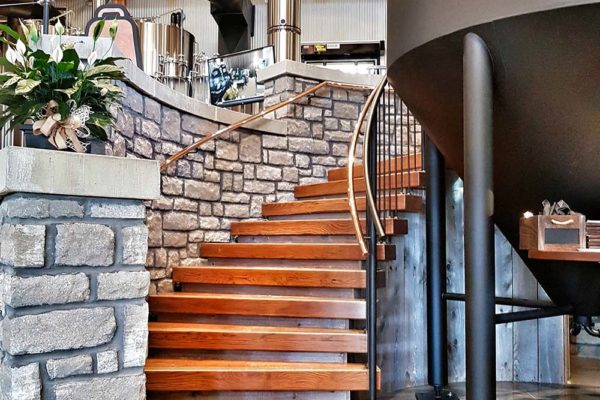 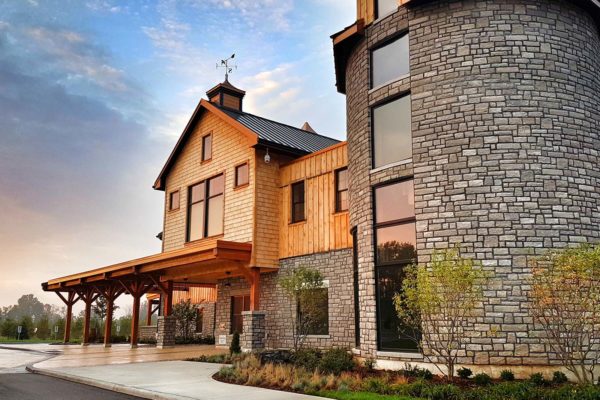 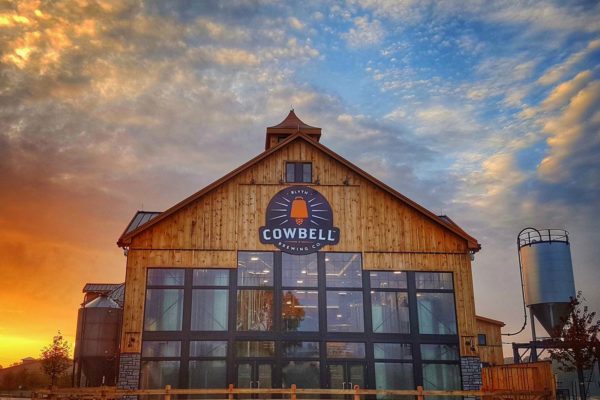 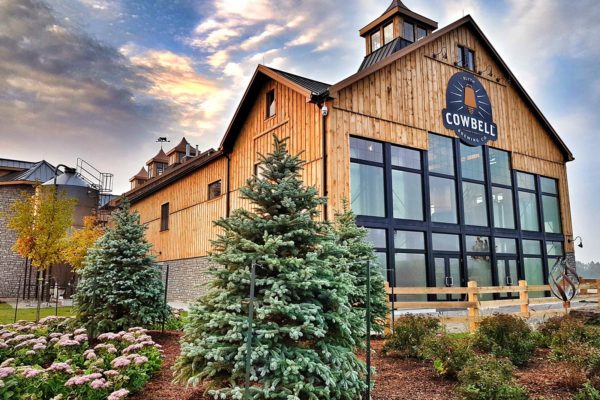