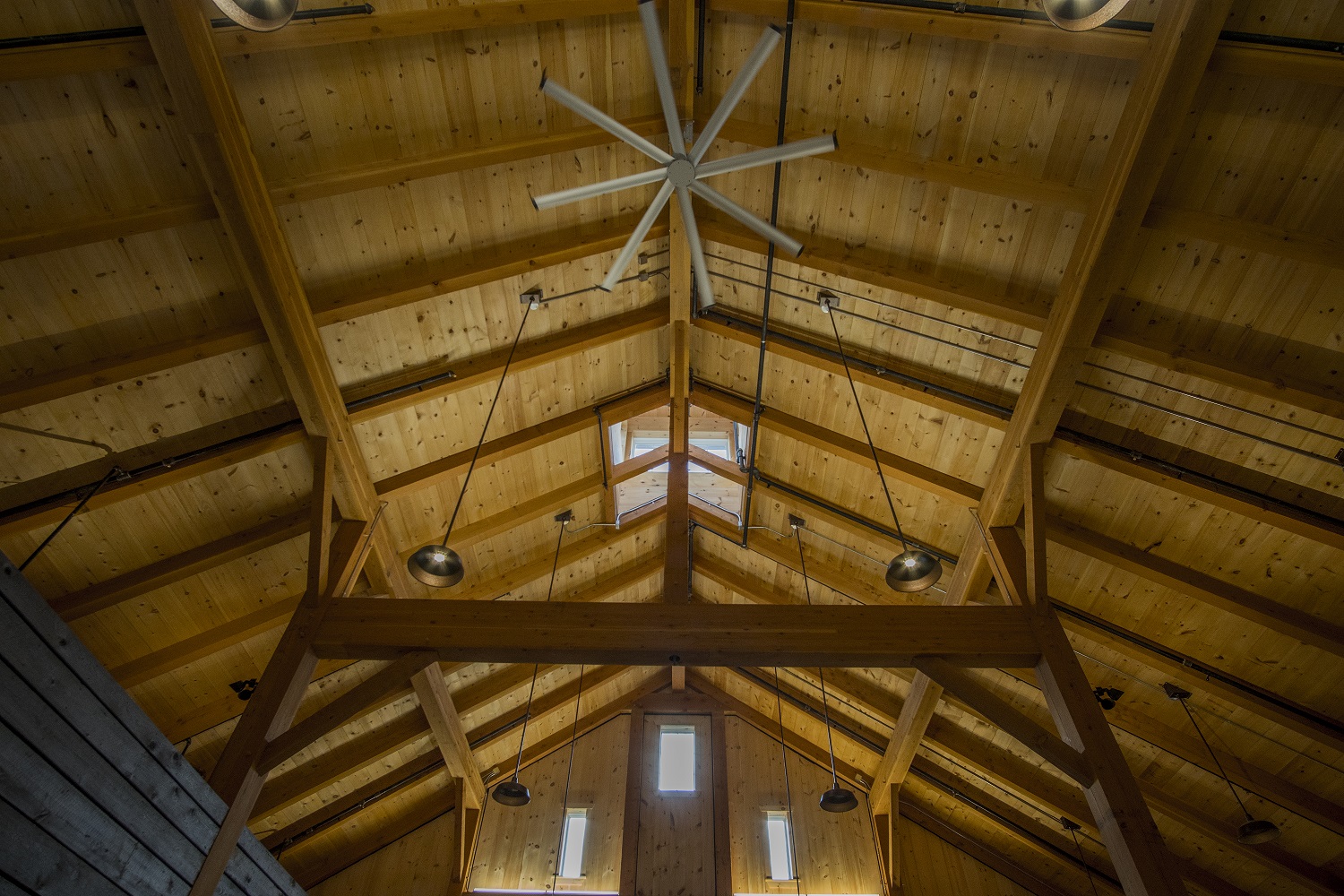 I recently finished an online continuing education course about Big-Ass Fans. I was pleasantly surprised that building energy and efficiency played a key role in the discussion, which would have applications in almost all project types undertaken by our firm, such as large volume spaces with high ceilings, i.e., churches, courtrooms, theatres and barns. I mention barns specifically as we have just completed a barn for the Cowbell Brewing Co. in Blyth, Ontario, where we used 7 Big-Ass Fans throughout the building.

I was interested to learn that winter heating loads can be reduced by as much as 30%, by installing a ceiling fan or a series of fans in a space. The concept is that the fans cause destratification of hot air trapped at the ceiling (that’s nothing new). This presentation, however, helped to better explain why this is the case. Temperature differences between the floor and ceiling, in spaces with high ceilings, can be as much as 20 degrees Fahrenheit. This causes an increased temperature differential between the interior air at ceiling level and the outside air temperature, thereby, creating greater air pressure differentials and accelerated heat loss through ceilings and roof assemblies. Stratification of air also results in heating systems working harder, in order to maintain the set temperature at the occupant floor level.

So, just to emphasis, a 30% reduction in heating bills can be achieved by doing nothing more than installing fans. Imagine how much insulation, or other building envelope upgrades, would be required to obtain a 30% energy reduction. We’re talking about hundreds of dollars for fans versus tens of thousands of dollars for other upgrades. Additional cost savings are available for both retrofits and new construction. The heating system itself can be downsized, realizing capital cost savings for smaller heating equipment.

The same energy reductions available for heating months can also be realized in the cooling months of the year. The recommendation is low speed in winter months and a higher fan speed in the summer months, providing for increased air movement, so thermostat temperature set points can be increased. The higher velocity of air movement from fans creates greater occupant comfort even at higher air temperatures because air movement on the body increases evaporation and results in a cooling effect. If the thermostat could be increased by just 4 degrees Fahrenheit, the energy saving would be 20%. In one case study, at the Iowa State University Recreation Centre, ceiling fans were installed to help with reducing the cooling load and they were able to reduce the required air conditioning capacity by 500 tons.